Did you ever wonder how different kinds of fish compare in terms of the nutrients they offer? Do you want to be sure you’re consuming the types that provide the most significant health benefits?

Fish are an excellent source of lean protein. They contain omega-3 fatty acids that can protect against diabetes, heart disease, and inflammation. Several types also offer significant amounts of potassium, calcium, and iron.

To compare these nutrients, we considered a portion of 6 ounces (168 grams) and included only finfish, excluding other types of seafood.

Initial evaluations show the top five for each nutrient. The final ranking compiles the results to determine the most and least nutritious types of fish.

Most fish have similar amounts of protein, making all of them valuable sources of this nutrient. The top five include a few ties:

The amount of omega-3 can vary significantly from one type of fish to another, as follows:

Note that the number for tuna is for the fresh albacore variety. Canned tuna contains a maximum of 1.4 g per 6 oz.

Potassium contributes to the healthy functioning of our cells, muscles, and nerves.

Most scaly fish have little of these minerals, providing 4% or less of the recommended daily value (DV). A few finfish contain more than 4% of the DV for calcium or iron. However, there aren’t enough to construct a top-five ranking for each nutrient:

If you’re interested in consuming more calcium and iron, you might want to try shellfish, which tend to offer higher percentages of these minerals than finfish. 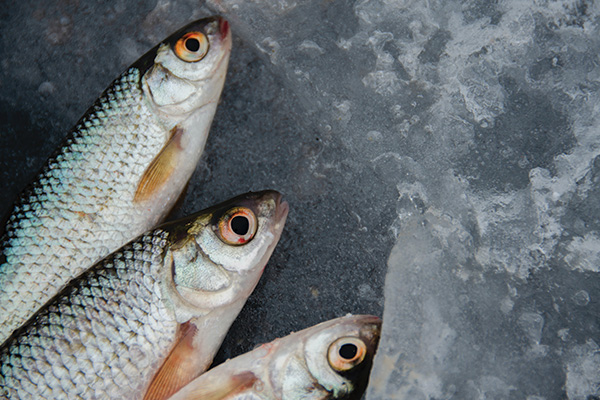 Based on the nutritional information above, these are the five kinds of finfish that ranked highest overall and contain the most nutrients per portion:

Sardines come in at the top due to ranking first in omega-3, calcium, and iron. The high calcium levels come from the bones, which you eat along with the meat, unlike those of other fish.

Fresh albacore tuna ranks first in protein, second in potassium, and fourth in omega-3. Canned tuna comes in much lower in omega-3, but still contains significant amounts of protein and potassium.

Halibut ranks first in potassium and third in protein. It also contains more iron than most finfish.

Rockfish comes in fourth in potassium and fifth in protein. As a result, it scores higher than the finfish that didn’t appear in the individual nutrient rankings.

At the opposite end of the scale, several fish have overall nutrients that make them the least advantageous to consume. These include:

Other Aspects to Consider

In addition to the nutrients analyzed above, you may want to consider other factors when choosing what kind of fish to eat.

If you’re concerned about your cholesterol intake, you might want to focus on fish low in this nutrient. Examples include tuna (yellowfin and albacore), snapper, grouper, and halibut.

Mercury is toxic to humans when consumed in excess. The U.S. Food and Drug Administration (FDA) considers 1,000 parts per billion (ppb) to be safe for adults. The following fish come close to that limit:

The suggested limit for women who are expecting a baby or planning to become pregnant is 500 ppb. Thus, people in this category should avoid the fish listed above.

Several types of finfish have a higher risk of containing pollutants. They include wild catfish, warm-water fish, lake trout, and fish found in bodies of water with agrochemical runoff.

You may want to avoid farmed fish, as well. Their feed often contains ingredients like soy, animal products, and dyes.

The finfish containing the fewest pollutants are tuna, salmon, and those found deep in the ocean.

Fish are an excellent source of lean protein and essential fatty acids. They contain minerals critical to our body’s functioning, including potassium, calcium, and iron.

However, not all types of fish are created equal. The top five with the highest nutritional value are sardines, fresh albacore tuna, salmon, halibut, and rockfish. Those lowest in protein, omega-3, and essential minerals are catfish, flounder, sole, orange roughy, and pollock.

Before you select fish for your dinner, you may also want to check other factors like cholesterol, mercury levels, and risk of pollutants. By paying close attention to the nutrition information for the seafood you consume, you can guarantee you’re getting adequate nourishment and avoiding toxic substances.

Low Carb Diets: Why You Might Want to Consider One